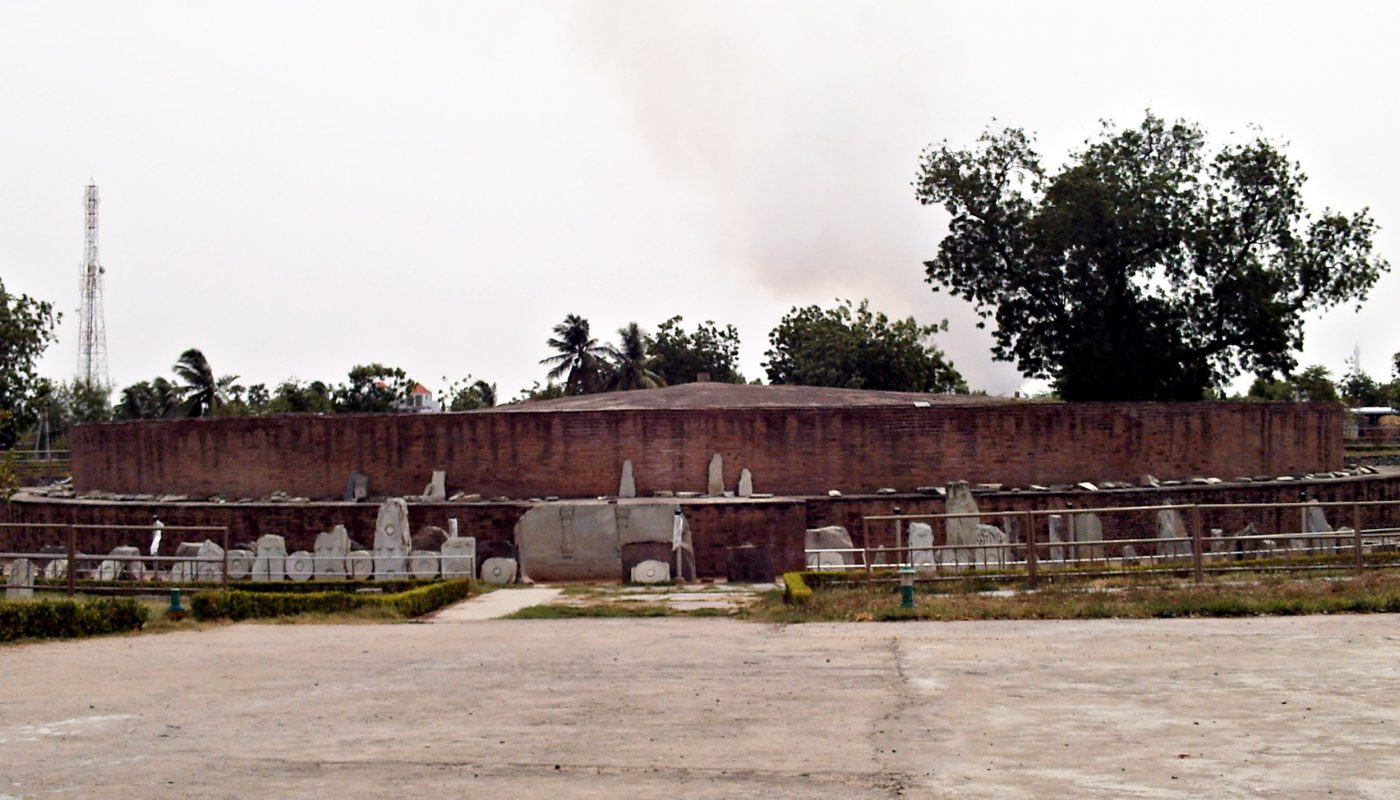 Amaravati Stupa, also known as the Great Stupa of Amaravati, is a damaged Buddhist monument in Amaravathi village, Guntur district, Andhra Pradesh, India. It was probably built in phases between the third century BCE and about 250 CE.

Amaravati Stupa was built roughly 2000 years ago, somewhere between the 3rd and 2nd centuries BC. It was constructed during the era of Ashoka the Great of the Mauryan dynasty, who was responsible for the construction of numerous Buddhist monuments throughout the Indian subcontinent.

Until the 14th century, when it was abandoned, the stupa was a prominent centre of prayer. The statue became completely covered in dust and trash over time.

It was uncovered in the late eighteenth century by the workers of a local Zamindar, Raja of Chintapalli. A British army soldier named Colin Mackenzie visited the location a year later and became the first person to document his observations following the rediscovery. Since then, a number of well-known archaeologists have visited and worked on the shrine.

Amaravati Stupa of Amaravati was embellished with intricate limestone reliefs and statues of Lord Buddha were carved on it when the area became the capital of the Satavahana rulers.

It was built during the reign of Ashoka Maurya in the 3rd-2nd centuries BC and expanded under the patronage of Satavahana and Ikshvaku in the 1st-4th centuries AD. In the second century AD, it reached its pinnacle of glory. It was a religious centre for hundreds of years before falling into disrepair.

The Great Stupa’s ruin had degraded into a mound of debris by the mid-1790s, with remnants of sculpture strewn about.

Colin Mackenzie, a British colonel, heard about the place and went there in 1797. Only in March 1816 was he able to return. A series of excavations took performed at the site in the nineteenth century. The monument is no longer standing on the site and has only been preserved in museum collections of Amaravati sculptures.

With a diameter of around 50 metres and a height of about 27 metres, the Amaravati Stupa is the largest in the state of Andhra Pradesh. It is made up of a circular vedika that depicts Lord Buddha in his human form riding an elephant.

The stupa’s high platforms protrude in four directions. This monument in South India exemplifies classic Mauryan architecture. During the 19th century, local contractors utilised much of the stone used to construct the stupa to produce lime mortar.

Many of the statues discovered here were removed and are now in museums across the country. However, a few shattered pillars remain to remind visitors of the monument’s historical significance and magnificence.

The most recognisable monuments of ancient Buddhism are stupas. The Mahacaitya of Amaravati was composed of a massive, solid dome on a cylindrical drum-like platform, all of which was encircled by a massive railing of tall pillars split by crossbars and topped with a high ornamented coping.

The entire railing was decorated in narrative reliefs and ornate embellishment. There was a gateway at each of the cardinal points. A circular path runs between the railing and the drum. The colossal cylindrical drum was lavishly embellished with sculpture.

A series of alternating slabs and pilasters adorned the exterior. The slabs, which are carved in exquisite detail with depictions of the stupa, are an essential source of information regarding the Great Stupa’s original look.

Sir Walter Elliot unearthed sculptures in Amaravati in 1845 and transported them to Madras, where they were displayed on the green in front of the College. The Court of Directors inquired into their condition in 1853, and they were relocated to the front entrance of Madras’ newly built Central Museum. The officer in charge of the Museum, Edward Balfour, commissioned the Rev. W. Taylor to write a report on them.

Due to the watermarks, it appears that these drawings were created for the Company at this time by an Indian draughtsman named Murugesa Moodaliar. One hundred and twenty-one Amaravati sculptures, including the ones shown here, were shipped to London in 1859.

The upper portion of dome slabs carved with the Death of Buddha symbolised by the stupa in the bottom register of the relief is depicted in pictures No.41 and No.43. A row of lions and a leaping ram in the centre of No.43 are above this, below a row of Triratna’s (symbol of the Three Jewels of Buddhism). The reliefs date from the second century AD.

The drawing No.42 portrays the upper border piece of a dome slab carved with Triratna’s mounted on lotuses above a row of lions, which is likewise dated to the 2nd century AD.